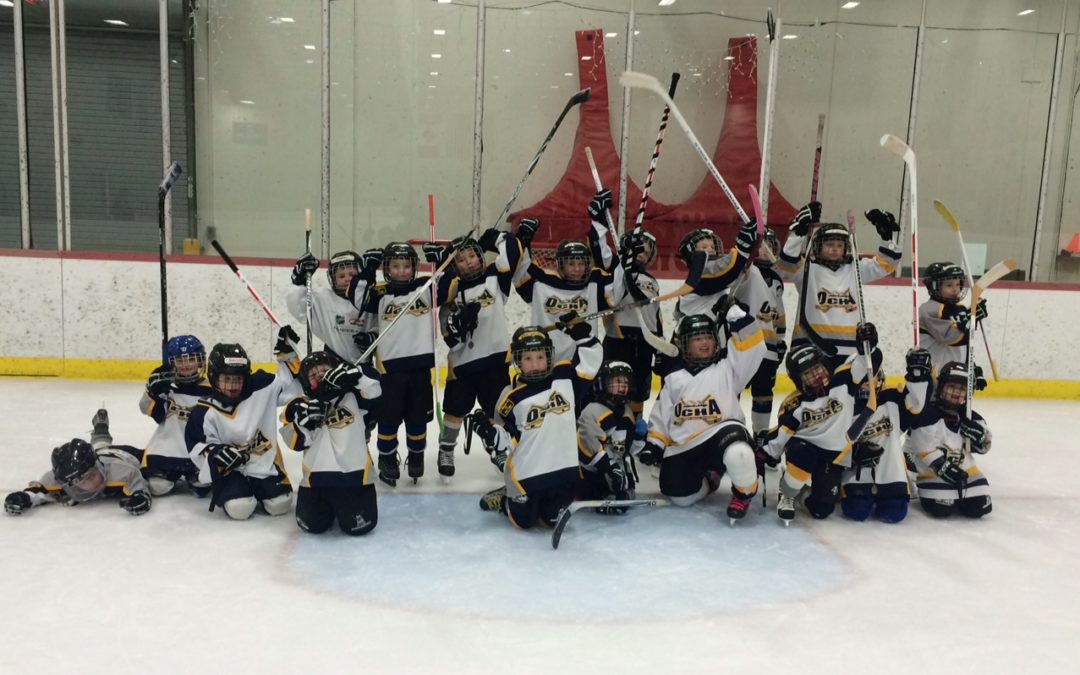 For many years, the Otsego County Hockey Association (OCHA) has impacted the lives of countless young hockey players with grants from the the William and Linda Muzyl Fund of the Otsego Community Foundation. In 2019 the OCHA helped introduce hockey at an affordable price to 40 families because of this fund’s generous support, which helped them not only learn the game but also teamwork. One story that OCHA shared is of Konner, written by Frank McClelland:

Konnor is five years old, and he has his own unique view of the world. During the first practice of our Initiation Program (IP), his mother came to me and indicated that Konner would need special attention. I sensed nervous concern in her tone and tried to assure her that my many years as a classroom teacher gave me some understanding and expertise with kids like her son. But I quickly found that Konner didn’t give a hoot about all my professional experience—he had other plans.

I soon learned Konner’s vocabulary was limited, and his favorite words seemed to be an ever escalating chorus of “No, no, no!” He was not comfortable on the ice and resigned himself to pushing a skate trainer around while being oblivious to anything we tried to get him to do. I was lucky enough to have a few parents and two local high school players assisting with the IP group and they took turns working with Konner.

Weeks went by with Konner pushing that darn skate trainer around while singing “No, no, no” to any directions we gave him. Then, one night, it happened. He discarded the skate trainer and started shuffle stepping around the ice, carrying his stick one handed and tucked between his own legs. This progressed into him agreeing to be the goalie when we had scrimmages. That soon changed to him shuffle skating out of the goal and trying to follow the flow of play during our mini-games. We began noticing he and other kids were having brief interactions on the ice, another new development. Konner and family even joined us in driving 120 miles north to Sault Ste. Marie, Michigan, to play in a tournament called the Kaine’s Festival. The Kaine’s is for under sixers and is held in an old train station with tall open windows serving as refrigeration for the ice. Konner was exposed to freezing cold (it was minus thirty degrees that weekend) and a whole new set of challenges and people, but he did not fold under the new challenges and pressures. He skated and followed the puck as best as his skills would permit.

A few weeks later, we were to have a group of our under sixers on the ice before a high school game. The plan was for each of them to accompany a high school player on the ice during player introductions and the National Anthem. Again, this presented Konner with a whole new set of challenges which I thought might be overwhelming. This included buddying up with this really tall stranger (the high school player who Konner was to follow out on the ice). Crammed into the small area by the Zamboni gates, we had the entire high school team, a proud gaggle of parents snapping photos and a Zamboni. Hanging in the air above all this was the noise from the public address system and the fans in the bleachers. Konner seemed dwarfed by everyone and everything. I even felt the need to tap the shoulder of the high school player with Konner, and advise him that Konner would need a little bit of support when they all moved out on the ice. The player looked down at Konner and gave him a smile that told me my prompt wasn’t necessary, Konner was in good hands.

On cue, everyone moved out on the ice and lined up for introductions. When Konner’s partner was called to the blueline, Konner followed along with his usual unique skating style. The National Anthem went next and Konner stood patiently with the line of players. He seemed happy to be there; it was great! After the ceremonies, Konner’s mother shared a short phone video of Konner skating on his own during a public skating session. She was beaming. Months before all this, she had been told by an “expert” that he would never learn to skate. My guess is that the expert hadn’t checked with Konner.

Konner has reminded me that hockey is more than techniques, tactics, trophies, scores, stats and team standings. The smile on Konner’s face that night is another great hockey memory—one of the best for this old coach.

Stories like these are what make our donors granting wishes so cherished. The Otsego Community Foundation is here to help bring the needs of the community to our many endowed funds so they can make an impact in the lives of those who live in our community. If you would like to know more about donor advised funds, please contact Dana Bensinger at [email protected] or by calling 989-731-0597.