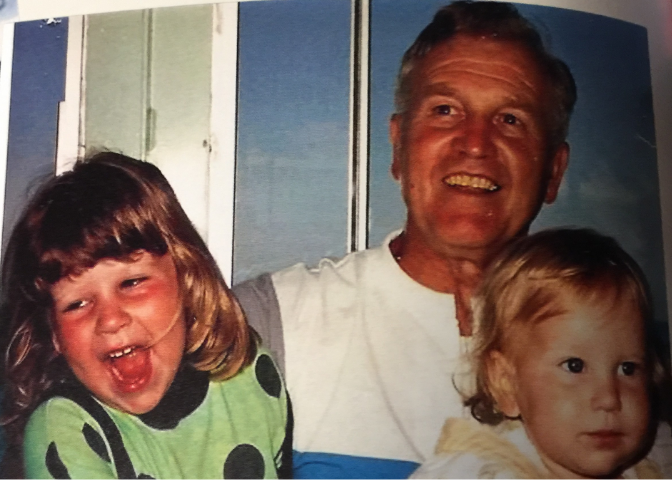 “This was my father’s favorite quote and what he believed”, said Cindy Pushman.  “We were raised that we are very fortunate and we are responsible for sharing our good fortune with our neighbors and community. He also believed a gift of time is much more impactful than any monetary gift.  My Dad loved children and devoted his life to improving the lives of children.”

When he was four, he was sent to a children’s home.  It was the Depression, his father was an alcoholic and left the family, and his mother could not get a job and take care of the kids.  He was there for nine years. Tom’s mother eventually remarried and brought her children back home.  Tom served in World War Two, and through the G.I. Bill pursued a career in education.  Tom Gill became the much-loved and respected Superintendent of the Gaylord Schools and served for 16 years.  He was known in town as an all-around “good guy.”

Tom Gill’s story inspires anyone who is challenged by a difficult situation.  Phyllis Gill remembers conversations with her husband.  “He said being in the children’s home was the best thing that could have happened to him.  He had three meals a day, clothes to wear, kids to play with, ‘Just no one to love me…’  But Tom always felt that someone provided for him when he needed it, so he should give back.”

Tom Gill “gave back” by helping to get the Otsego Community Foundation off the ground in 1992. He started scholarship funds throughout Michigan.  In 2011, his family established the Tom Gill Memorial Fund of the Otsego Community Foundation with plans to address the unique needs of children and students facing hardship.  Since established, the Tom Gill Memorial Fund has awarded grants to organizations such as Otsego County Child Welfare Alliance, Great Start Collaborative, the Otsego Judicial System and most recently Wellspring Lutheran Services.

From children’s home to children’s advocate, Tom Gill overcame so many obstacles, yet always remembered to help others along the way.  The Tom Gill Memorial Fund will continue to give to the causes that mattered most to Tom Gill.